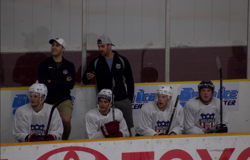 Since 2011, the East Coast Militia has been at the forefront of elite AAA youth and midget hockey in New England. Founded as a spring and summer showcase program by former Babson College star Nik Tasiopoulos, the Militia quickly established itself as one of the nation’s best showcase teams. From ages 8-20, in both boys and girls tournaments, the Militia captured numerous spring and summer tournament championships. To this day, the Militia continues to field teams in highly-competitive recruiting tournaments and showcases.

In recent years, the Militia has expanded to become New England’s largest midget AAA program. The Militia offers a U18 full-season team, along with various Tier 1 and Tier 2 National-Bound teams at the U18, U16, U15 an U14 levels. Since 2011, the Militia and its various showcase, split-season, and full-season teams have seen over 200 alumni reach the NCAA Division 1 level, and over 60 alumni advance to or be drafted by NHL teams.